Half a handful of nuts a day 'reduces early death risk' 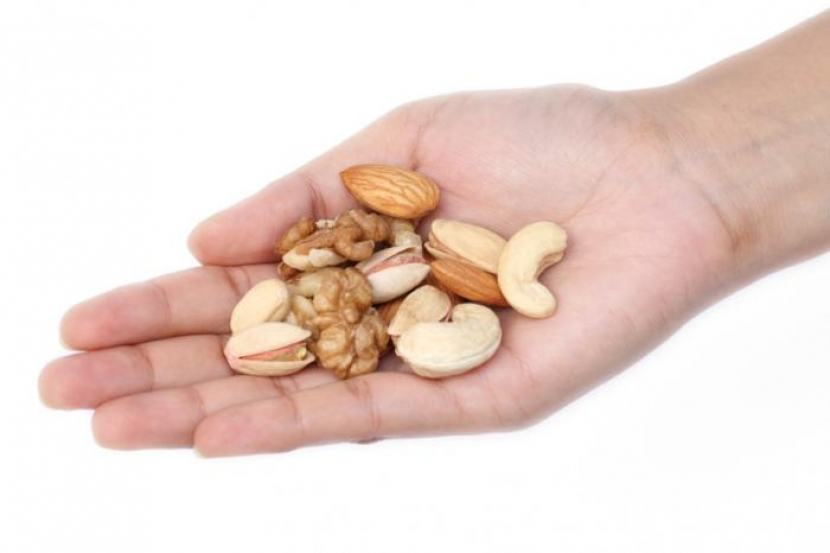 "A handful of nuts can save your life, says new study," The Daily Telegraph reports after a Dutch study found a link between daily nut consumption and a reduced chance of dying from a number of chronic diseases, including cancer and heart disease.

The study assessed the dietary and lifestyle habits of middle-aged to elderly adults from the Netherlands and followed them up over the next 10 years.

Overall, researchers found people who ate nuts had a decreased risk of death from any cause as well as various specific causes, such as cardiovascular diseases and cancer, compared with those who didn't eat any nuts. The most reduced risk was found with the consumption of 5-10g of nuts a day.

However, not all risk reductions were significant and some of the researchers' analyses were based on very small numbers, which means some of the results may not be that reliable.

Also, it is possible nut consumption is just one factor that's part of an overall healthier diet and lifestyle, and people who regularly eat nuts may be healthy in other ways.

Nuts are a good source of healthy unsaturated fats, protein, and a range of vitamins and minerals, so having them as a daily snack isn't a bad idea (provided you're not allergic). Unsalted nuts are the healthiest option.

Where did the story come from?

The study was carried out by researchers from Maastricht University Medical Centre in the Netherlands, and was funded by the study authors, who report no conflicts of interest.

It was published in the peer-reviewed journal, the International Journal of Epidemiology.

What kind of research was this?

This cohort study aimed to look at how the consumption of peanuts, tree nuts (such as Brazil nuts and almonds) and peanut butter was associated with mortality.

The researchers say nut intake has often been associated with lower mortality, but often studies have focused on cardiovascular outcomes and have not looked at death from other causes. Dose-response relationships are said to remain unclear.

This study looked into this using a large cohort of middle-aged to elderly people, who provided dietary and lifestyle information and were then followed up for 10 years.

The researchers looked at deaths and causes of death. They supplemented this by a search for the results of other similar published cohorts.

But the main limitation with this study is it cannot prove direct cause and effect, and any associations seen could be influenced by other factors.

What did the research involve?

At enrolment, participants completed questionnaires on dietary intake, medical conditions, smoking and other lifestyle factors. The food frequency questionnaire covered food and drink consumed over the past year.

The cohort was followed for 10 years until 1996. Information on deaths and causes of death was obtained from Statistics Netherlands and the Central Bureau for Genealogy, which use valid medical codes (the International Classification of Diseases, ICD).

There were 18,091 deaths during the 10-year period. The researchers decided to compare the questionnaires of the people who died (cases) with a random sample of 5,000 people from the cohort who had not died (controls).

They excluded cases and controls who reported cancer or cardiovascular disease at study enrolment or those with incomplete questionnaire data, leaving a final sample of 10,382 people who died and a comparison group of 3,693 surviving members of the cohort.

They also conducted a supplementary literature search of one medical database to identify other published cohorts looking at links between nut consumption and cause of death.

What were the basic results?

Overall, the study found the average total nut intake in the cohort was 8.1g a day for men and 4.4g a day for women, with peanut butter 1.4g and 1.2g, respectively.

They found higher nut intake was associated with various other factors, including higher fruit, vegetable and alcohol intake, higher educational level, and, in women, not smoking and a lower body mass index (BMI).

In analyses adjusted for age and various other health and lifestyle factors, the researchers found there was a significant trend for people consuming more nuts to have reduced risk of death compared with those not eating nuts:

Looking at specific cause of death, they found trends for the risk of death from the following diseases to be reduced by nut consumption compared with no consumption:

However, within the individual disease categories, as with overall deaths, there wasn't a consistent linear pattern where increasing nut consumption was associated with lower risk.

For overall deaths and various diseases, the risk decrease seemed to be lowest for the middle consumption category (5-10g a day).

In some cases, the risk decrease for a particular consumption category just fell short of being statistically significant (one of the confidence intervals touching 1.0 or 1.1), meaning we can't be sure this is a real decreased risk compared with non-consumption.

The researchers found peanut and tree nut consumption were linked with a decreased cause of death, but peanut butter alone was not. Possible reasons given for the differences between nuts and peanut butter were the addition of salt and trans fats in peanut butter.

Combining the results of other studies identified through their literature search found a 15% decreased mortality risk for the highest compared with lowest nut consumption (HR 0.85, 95% CI 0.77 to 0.93).

How did the researchers interpret the results?

The researchers concluded that, "Nut intake was related to lower overall and cause-specific mortality, with evidence for non-linear dose-response relationships. Peanut butter was not related to mortality."

This Dutch cohort of middle-aged to elderly adults generally found people were less likely to die in the following 10 years if they ate a small number of nuts a day compared with none.

The study has strengths in its large sample size and that cause of death was followed up for the full cohort using valid medical codes.

However, there are various points to bear in mind before we jump to the conclusion that nuts are the magic ingredient that will slash our risk of death.

It is difficult to draw any clear interpretations about how nut consumption may be associated with risk of death overall or from specific causes.

There weren't clear linear trends where increasing consumption was associated with increasingly decreased risk, and often the middle consumption category (5-10g per day) had the lowest risk.

This is roughly a small handful of nuts, depending on the type of nut. Not all of the risk decreases for different consumption categories or diseases were significant, meaning we can't be sure there is any real decreased risk compared with non-consumption.

When looking at specific cause of death, some of the analysis was based on very small numbers of people.

Analyses based on such small numbers of people may be less reliable and are more likely to give significant findings by chance.

Use of food frequency questionnaires

Nut consumption was assessed through food frequency questionnaire. Though this is a valid method, it may introduce inaccuracies.

For example, many people may find it difficult to estimate roughly how many nuts, or grams of nuts, they eat a day on average over the course of a year. It is also not clear whether this takes nuts in cooked or baked items into account.

Although the researchers have adjusted for various medical and lifestyle factors in their analyses, it is still possible that these effects, and other unmeasured factors, have not been fully accounted for.

That is, it is difficult to pin the direct cause of any decreased risk on nuts specifically. If nuts are associated, it is possible they are just one factor in an overall healthier diet and lifestyle.

Lack of information on cause of death

The study has looked at cause of death, but has not explored within these categories. For example, neurodegenerative disease or cardiovascular disease encompasses various diseases and health problems.

Though this study involved a large cohort, these people are all a specific population of middle-aged to elderly adults from the Netherlands. The results may not be applicable to younger populations or those from other countries.

This study will add to the wide body of literature looking into the health benefits of different diet and lifestyle patterns.

But nuts aren't for everyone: some people can have severe life-threatening allergic reactions to them. And it doesn't provide proof that nuts alone are the magic health ingredient for a longer life.

Despite constant media reporting, there is no such thing as a single superfood that will prevent ill health and premature death. Eating a daily portion of nuts will do you little good if you smoke, don't take any exercise, drink alcohol to excess, and are overweight or obese.

The best way to stay healthy is to take regular exercise and aim for a healthy & balanced diet that includes plenty of fruit, vegetables and fibre, limited saturated fat, salt and sugar, watch how much alcohol you drink, and avoid smoking.